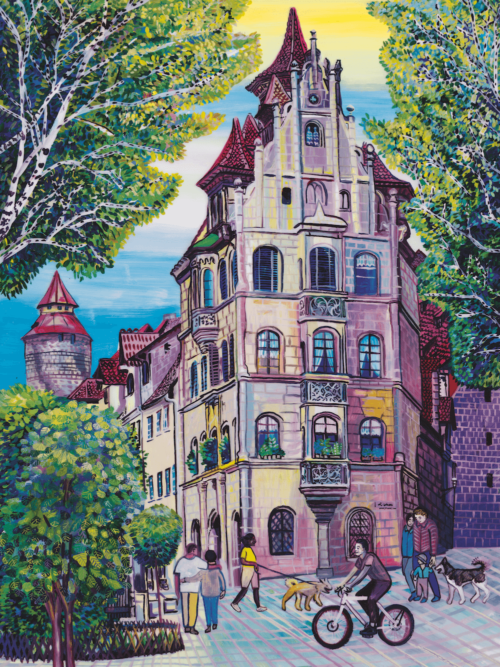 limited to 120 prints – signed and numbered by the artist

This Giclée print on Hahnemühle Fine Art Paper was made in 2021 and is available in an edition of 120 prints.

The Toplerhaus was an important Renaissance town house in Nuremberg, which was named after the Topler patrician family. It was destroyed in a bombing raid during World War II.

Jakob Wolff the Elder built the house in 1590/91 as a tower-like sandstone block with a pinnacle gable.

During the air raid on January 2, 1945, the house burned down and collapsed; the remains were later removed. The post-war building that was built in the same place is a simple functional building without any relevance to the history of the building.

Marina Friedrich brought the lost building to life in an illustration made from old photographs. She places the building in the Nürnberg of the year 2021 with people crossing in front of the house.

For questions don’t hesitate to write an email to the gallery mail@arcontemporary.com

In order to provide you a personalized shopping experience, our site uses cookies. By continuing to use this site, you are agreeing to our cookie policy.
ACCEPT